2014-06-23 9
Imperial (double) IPA, a style recently developed by American craft brewers, is the IPA analog to imperial stout. In other words, take every characteristic you'd normally associate with an India Pale Ale - primarily hops and alcoholic content - punch it up a few notches, and you've got an imperial IPA. Ranging from golden to amber in color, these beers have complex flavor and aromatic qualities derived from their fruity esters, high alcohol and medium to high malt content.

When we decided to release an IPA, we were unsure of the direction we wanted to go with it and, in typical brewer fashion, began by drinking an ungodly ammount of beer. This dipsomaniacal behavior was not random, however, but directed toward every IPA we could get our mitts on. After sampling a broad cross section of American (and some English) IPA's we decided that Cascade, Chinook, and Columbus hops were perhaps over represented and we'd focus on showcasing some of the brilliant European hop varieties.

Starting with a malt bill of mostly Cargill Pilsner malt (with 5% 60°L crystal) we immediately began the hop additions by adding 5 pounds of Northern Brewer right into the mash. Futile? Frivolous? Perhaps, but Greg and I heard of this practice at the Craft Beer Conference in Cleveland and thought we'd give it a go. The remaining hop additions were: Northern Brewer in the boil, Challenger at 20 and 10 minutes before the end of the boil, and East Kent Goldings right before the whirlpool.

We began fermentation with an OG of 18.4° P and finished out around 5° P. It finished a tad high perhaps but at 7% ABV it's still worthy of it's Big Beer label. We concluded our hop additions by tossing close to 30 pounds of a mixture of all three varieties in to the fermentor for dry hopping.

The finished beer has a smooth, earthy hop flavor, with the residual body easily able to support the 70 IBU's. The nose has a hint of oranges which goes well with the similar color of the beer. Overall it's a good first effort to which we've already made some changes and, hopefully, improvements. As the release of the second batch nears, I'll update this page so be sure to check back. 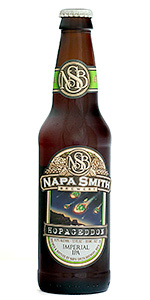