2014-09-18 8
Originally brewed in the early 19th century for export from Britain to the imperial court of Russia's Catherine the Great, imperial stouts are characterized by their dark color, full body and high alcoholic content. This style features a rich, malty sweetness coupled with aggressive hopping (especially in American interpretations). Notes of dried fuit as well as roasted malt flavors are typically present.

12/17/02 - Imperial Stout. Oh, man, the name alone gets me salivating. The big daddy, the high muckity-muck of dark beers. Visions of how brewers get their skewed views from too many late nights dipping tasters and testers into cauldrons of this black addiction. Lucky for me making these beers isn't nearly as difficult as waking up after drinking a few. I had the pleasure of working with Chris Sheehan at The Twenty Tank where he always made awe inspiring stouts (still does at Chelsea Brewing in NY.) His thoughts were to really build up the base of the beer with tons of character malts before the addition of your roasted grains. I always figure a stout can't be too dark so load up on those caramel malts. All that sweetness needs to be balanced with a healty portion of bittering hops, we went with 75 IBU's. The most interesting part of this recipe was the use of Magnum hops for our bittering addition. This was my first time using them and at 14.8% AA and, or so I'm told, low cohumulone levels I was excited to check 'em out.

The brewing was fairly straight forward. We added a small percentage of oats directly to the mash and rested at 152°F. The lauter for this took an extremely long time (partly due to the oats but we've been having grain issues of late.) I ditched the oats in the second batch and it'll be interesting to taste the difference. Hop additions were made at the beginning of the boil, ten minutes before the end of the boil, and at the whirlpool. We fermented at a cool 64°F and allowed it a good month of fermentation / aging time.

The beer came out tasting great. The nose has a nice balance of chocolate and coffee with hints of sweetness / alcohol underneath. The body is big and velvety with the hopping present as an underlying spiciness. It tails off into chocolate milk shake. I'll try and dry out the second batch, but right now everyone here seems happy with the results. 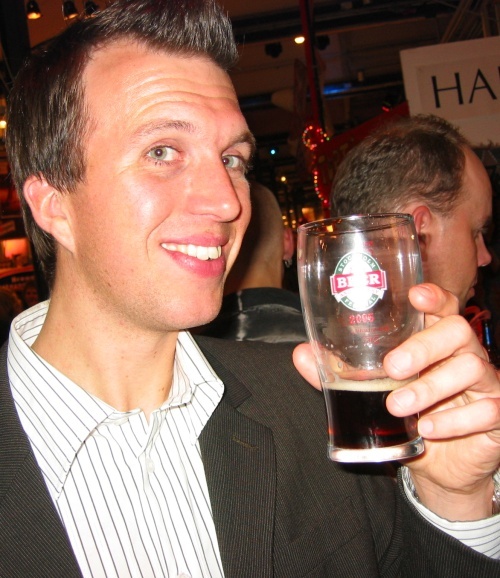