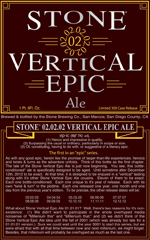 A new Vertical Epic will be released every year, with the goal being to collect them all and have a Vertical Epic tasting once the final Epic is released on 12/12/12. Each new Stone Vertical Epic Ale will be release one YEAR, one MONTH and one DAY apart. Vertical Epic 02/02/02 was not brewed "to style". Instead, we tried to create something new. It's triple-ish in nature, with wit character, coriander and orange peel, and has way more hops than either a Belgian triple or a Wit would. Belgian yeast was used. Belgian Strong Ale is the closest category that fits -- Greg Koch, Stone Brewing CEO.

In addition, we are pleased to provide the homebrewing recipe: http://stonebrew.com/timeline/020202 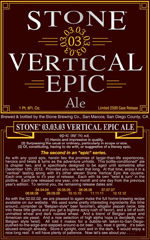