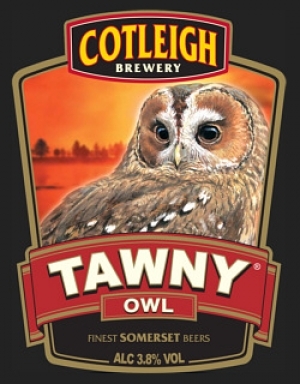 First produced by us in 1979, Tawny Owl is one of the West Country's best kept secrets. Tawny Owl is made exclusively with malts from Edwin Tuckers in Devon and has been for decades. We buy hops from the same corner of the Thomas Hop farm in Herefordshire and have done so for over 15 years. Every cask brewed is stored in the Cotleigh warehouse for up to 10 days. This secondary fermentation is critical to add flavour, vitality and body to the brew.

The Tawny Owl is nocturnal so it is often heard calling at night, but much less often seen. During daytime hours you may see one only if you disturb it inadvertently - unlike our Tawny Owl which can be seen tried and tasted in many freehouses in the West Country.