2011-10-16 9
The Barrel Aged Old Ruffian Barley Wine was aged for 20 months in used barrels from Stranahan’s Colorado Whiskey, Colorado’s only whiskey maker. As it also does for the Yeti, the aging process mellows Old Ruffian’s edge while adding gentle notes of oak, whiskey and vanilla to the 12.7% ABV and 85 IBUs beer. (The original Old Ruffian won a Gold medal at the 2006 Great American Beer Festival and a Silver medal at the 2007 GABF.)

Hair of the Dog Fred from the Wood 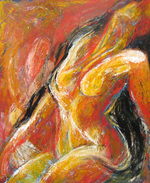