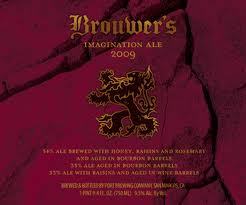 2011-06-27 9
The first release in the Imagination Series was a saison w/ Brettanomyces that won a bronze medal at the 2008 World Beer Cup, and this second release is a dark sour ale that is a blend of three different beers:
34% ale brewed with honey, raisins and rosemary and aged in bourbon barrels
33% ale aged in bourbon barrels
33% ale with raisins and aged in wine barrels