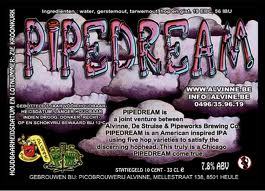 While Struise developped the recipe, Pipeworks enhanced the hop formula, and Glenn & Davy from Alvinne were so kind to let us brew this beer on their kit.

Pipedream is an American inspired IPA using five hop varieties to satisfy the discerning hophead. This truly is a Chicago Pipedream come true!
Belgian yeast meets American style IPA! Pours clear amber with a big white head and nice lacing. The nose is sweet, light fruits and big, spicy hops, smells of orange and banana. In the mouth is similar, with an attack of American, piney hop character, following through with sweet, light malts, Belgian yeast, and more hops with a lingering bitterness. The yeast character is more noticeable on the nose than in the mouth, and the hops are bigger in the mouth. 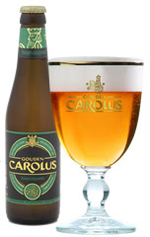