2013-10-18 8
The Sixth Glass Quadrupel is part of Boulevard’s Smokestack Series. Drawing inspiration from the great Trappist ales of Belgium, the term “quadruple” is often used by Americans to describe a strong but approachable beer, one the Belgians would most likely call “Abt” or Abbot. Each 35-barrel brew uses 2300 pounds of grain, consisting of two-row pale, light caramel, and Special B malts, and a measure of malted what. This brew contains an extra 350 pounds of golden and dark brown sugars, and Noble Styrian Golding hops from Slovenia.Stored upright in a cool, dark place, this beer will mature for up to 10 years. Drink the Sixth Glass from a goblet at 50 – 58 degrees Fahrenheit. 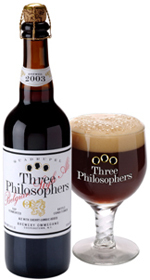